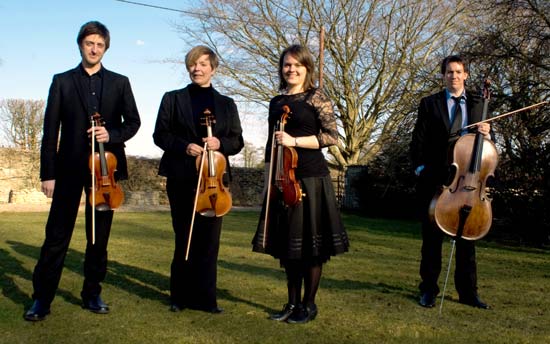 After more than 15 years, the Ardeton Quartet continue to wow audiences across the UK and beyond with detailed and exciting performances of music in just about every style and setting imaginable. Equally at home on the concert platform, a wedding reception or a rock venue, they have maintained both a consistently high standard of performance and enthusiasm in everything they do.

Formed in 2001, the ASQ was one of the first quartets in the UK to start offering selections of jazz and pop hits in their repertoire and to publicise themselves solely online. This quickly led to them performing at around 70 weddings and numerous corporate functions a year which has remained pretty much a constant level since, with clients including LLoyds TSB, Sky and Marks & Spencers. They have performed at classical music festivals in the UK and Norway, have appeared at a number of rock and folk festivals including Sidmouth and IndieTracks, and have made a number of TV appearances on BBC, ITV and SkyArts.

As wedding musicians they have played for around 1000 happy couples. No wedding is the same, and they have performed everywhere from cathedrals to farmyards, barns to stables. Clients regularly send their thanks for both their professionalism and their flexibility, as well as comments from their guests on their varied repertoire.

The quartet have appeared as session musicians with a number of published artists over the years and at major events. They can be heard on CDs by Tanya Walker, Jess McCallister, The HiLife Companion and The Cautioners. They have performed for royalty and celebrities alike, and to audiences from 10 to 1000.

One of the secrets to their success is their close working relationship - they've performed together at around 1000 events. With little more than a facial expression they can cut, change or quicken the music to fit perfectly to whatever they are doing, which leads to a great sound - they can often sound like one giant string section.

About the Ardeton String Quartet